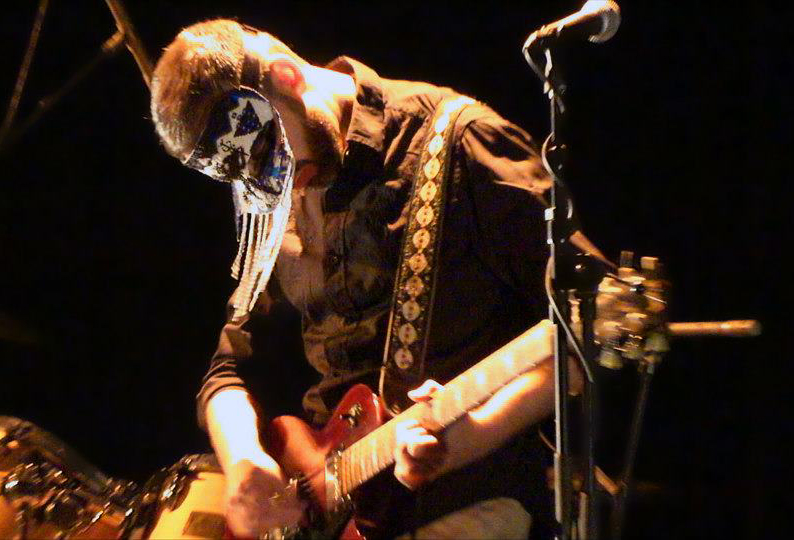 Nico Guerrero is a French experimental composer / guitarist. He made an impression with Vortex, his dark shoegaze project in the early 90’s. The 1st album ‘Eksaïphnès’ (Les Disques du Soleil et de l’Acier, 2000) laid down already the foundations for the frozen, cosmic and noisy universe that Nico was going to explore later.

Weaving textures of intense cosmic drones, his compositions reach out a certain sonic gigantism with a fairly minimalist instrumentation: a sole electric guitar and occult electronic alterations. The strings seems to resonate like hallucinatory echoes of organ clusters, expanding towards the infinite and implosing at the same time. In this very dense space of overtones, almost symphonic, ghost sounds appear from a swirling Magick chaos.

In 2015, Nico was invited by the American composer Rhys Chatham to create together a poly instrumental piece for electric guitars, flute and trumpet. He also played with him in studio, on stage in duet, and co-conducted the Rhys symphony for 100 guitars at Le Havre in june 2018.

The 2019 Nico album «Live at the Nordic House» was recorded during the Iceland Airwaves festival. Totally inspired by the wild Icelandic lanscapes and loneliness, this album pays homage to artists like Coil (with the cover of “A Cold Cell”) and the singer-songwriter Nico (of V.U.) whose specter is felt to barely veiled on “Clepsydra”.

Willing to create music only on Icelandic land, his latest studio album ‘Streams of Oblivion’ (Silent records / June 2021) has been entirely composed in Reykjavik in the winter 2021 and recorded/mixed in Paris on March 2021. Imbued with esoteric references, the 7 instrumental compositions for 2 to 5 electric guitars build a cathedral of sounds, summoning haunted drones with depthcharges of guitar overtones, all dedicated to the Icelandic telluric forces, volcanoes, entities, ghosts and deities

Cold ambient could be a good definition for this sound. The whole is deep, close to ceremonial, sometimes cold, bright or abstract, evoking a deep melancholy. It could remind the mood of Current 93, Hilmar Örn Hilmarsson or some solo works of Stephen O’Malley.